Ekta Kapoor is all set to bring those old and golden days of early 2000s with the reboot of her evergreen show Kasautii Zindagi Kay.Well, Do you remember the title song of the series? You can now remember the sweet lyrics of the song, “Imtehaan har ghadi ki. Kasauti zindagi ki”

After watching the first promo of Kasautii Zindagi Kay 2, you will be reminded about the epic love story of Prerna and Anurag. Intrestingly, the reboot has the same song

Yesterday Ekta took to her Instagram profile to share the teaser of her ambitious project. She wrote, ”Love never dies!!! When u think it’s over it RETURNS ! Here it is KASAUTI ZINDAGI KAY!”

Well, Kasautii Zindagi Kay reboot has new cast – Kuch Rang Pyar Ke actress Erica Fernandes who will portray the role of Prerna along with Kaisi Yeh Yaariaan actor Parth Samanthaan who is reprising the role of Anurag Basu. Now Ekta is now aiming to bring back her old audience with the show.

Surprisingly, the sets, costumes and even the promo song has been kept same. Now we must appreciate the Half Girlfriend producer for her creativity.

Meanwhile, a twitter user has shared the promo of older version, Check this out too:

For me no one can replace Prerna, Anurag, Mr.Bajaj & Komolika????❤❤#ShwetaTiwari#CezzaneKhan#RonitRoy#UrvashiDholkiya#KasautiiZindagiiKay2pic.twitter.com/yHaeKmqFLN 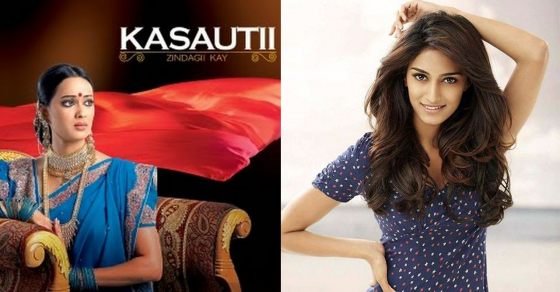 Meanwhile, we still don’t know as to who will play Mr Bajaj and Komolika. According to sources, Hina Khan is all set to play Komolika in the show but the producers of the show have not yet confirmed anything about it. Indeed this is a nostalgic moment for everyone of us.

Well, the epic TV serial return after a span of almost 17 years. Till now fans remember the epic pair of Shweta Tiwari and Cezzane Khan and the time slot of 8:30 pm when the show used to air on Star Plus. Now, it will be interesting to see that if Erica and Parth can create the same magic.

Kasautii Zindagii Kay All Characters Real Names with Photographs information and details has been provided here. It was first aired on 29th October, 2001 and went off air on 28th February, 2008 after completion of 1423 episodes on Star Plus. It was produced by Ekta Kapoor and Shobha Kapoor under the banner of Balaji Telefilms.