The North American B-25J-20 Mitchell, is an American medium bomber currently sitting at Rank 3 in the American line with an upfront cost of a 400,000. Design, Development & Operational History The B-25 was named in honor of General William 'Billy' Mitchell (a pioneer of U.S. Military aviation).

The famous B-25 raid over Japan on April 18th 1942 was led by Lieutenant Colonel James Harold 'Jimmy' Doolittle. It was originally conceived by a Navy Captain, Francis Low, the Assistant Chief of Staff for anti-submarine warfare. He was sure that the twin-engined Army bombers could be launched from an aircraft carrier. He came to that conclusion after watching the naval airfield in Norfolk, Virginia, where the runway was painted with the outline of a carrier deck for landing practice.

The mission was intended to bolster American morale and to show the Japanese they were not as invincible as they thought they were in the early months of the war. 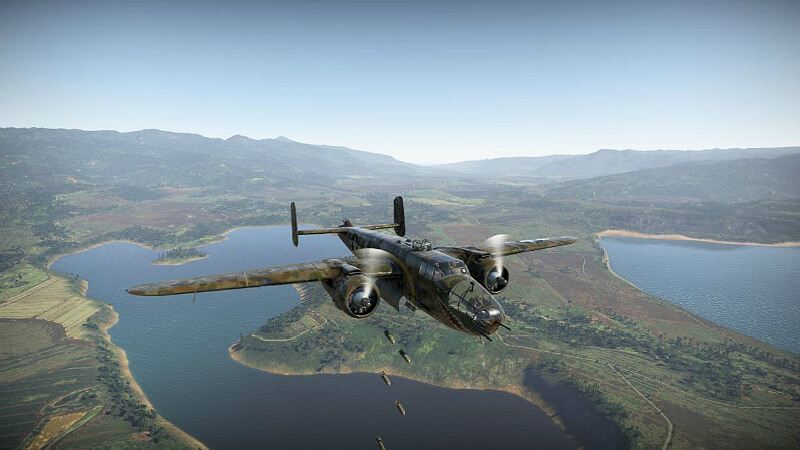 Doolittle was a famous civil aviator and he held a Science Doctorate in Aeronautics from the prestigious M.I.T. university and as such he was chosen to command the mission. The plan was to bring carrier borne bombers to within 650 km (400 miles) from Japan preferably to the south-southeast, with targets being the industrial areas in Tokyo, Yokahama, Nagoya and Osaka-Kobi areas.

Preparation went ahead and the B-25 was chosen although the Martin B-26 Marauder, the Douglas B-18 Bolo and the Douglas B-23 Dragon were also considered. Every plane was modified to be able to accommodate additional fuel which came to about 1100 gallons or 4100 liters. This was done by installing an additional 275 gallon leak proof tank within the bomb bay top and a 175 gallon flexible rubber tank in the passageway above the bomb bay. Various changes and weight reduction measures were done in order to make the aircraft lighter. This allowed the planes to reach 2,400 nautical miles (4,400 km) with a 2,000-pound (910 kg) bomb load.

The test flight, with two B-25s from the aircraft carrier Hornet, was done on the 3rd of February 1942. After successful tests, the project was put into full swing. All the crews were volunteers, chosen from the 17th Bomb Group (Medium), the first group to receive B-25s. Each bomber had a crew of five. 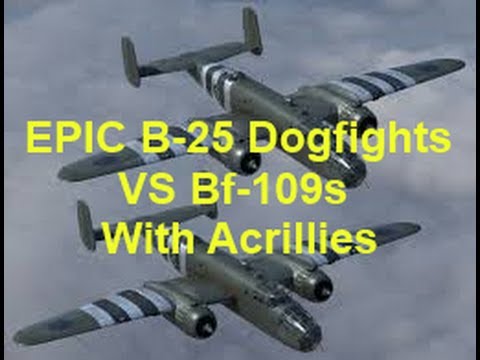 On April the 1st 1942, 16 bombers and their crews were loaded on the aircraft carrier Hornet, on April the 2nd, the Hornet sailed. A few days later, the Hornet and Task Force 16, met with Task Force 18 led by the aircraft carrier Enterprise which was providing close air and sea support. On the 18th of April in the early morning the Task Force was discovered by the Japanese picket boat No. 23 Nittō Maru some 1200 km (750 miles) from Japan. This was over 300 km (200 miles) further than planned but Doolittle made a decision to launch the bombers immediately.

16 bombers, each armed with four 500 pound (225 kg) bombs - three high explosive and one incendiary - successfully took off and flew towards their targets in groups of two and four before going solo, they flew at treetop level. The aircraft began to arrive at their targets around noon Tokyo time, and while some of the planes encountered anti air fire and few enemy fighters not a single bomber was shot down. They bombed the military and industrial targets in Tokyo, Yokohama, Yokosuka, Nagoya, Kobe and Osaka.

After the bomb runs, the aircraft changed course and 15 went towards China while one B-25 whose fuel consumption was very high, was forced to fly towards the Soviet Union. From 80 crew members, 69 managed to get to safety whilst 3 were killed exiting their plane at night and a further eight were captured by the Japanese. Four of them died and four managed to survive captivity.

While making very little economic impact, the bombing was important as a big morale boost for Americans and a shock to the Japanese. This attack was the catalyst for a Japanese decision to attack Midway which was the point in the war when Japanese lost their initiative.