Famous for its amazing beaches, beautiful people and fanatic soccer culture, Brazil is also a wild and exotic country with lots to offer in the way of natural beauty.

It’s also home to the Amazon River and rainforests, which, along with Brazil’s high annual rainfall and dramatic changes in elevation, make the country home to countless waterfalls. Below is a list of 15 amazing waterfalls in Brazil.

Located on the border between Brazil and Argentina in the Iguazu National Park, the waterfalls at Iguazu are comprised of nearly 300 individual falls, which are purported to have the most voluminous water flow of any falls in the world.

Located near the town of Curitaba – the capital of the Brazilian state Parana – the falls are accessible from both countries, though the majority are on the Argentinian side.

Designated as a UNESCO recognized site for their magnificence and ecological importance, the falls and national park are popular destinations for tourists to these two South American countries.

The area is known for its waterfalls, natural splendor, and the jagged, tooth-like rock formation that’s one of the highest in the area and the object of much native lore.

There’s a visitor’s center near the park entrance that’ll give you an overview of the topography, trails, and things you’ll want to see and do while there.

For those adventurous souls who want to burn a few calories, rock climbing, swimming, and cave exploring are available, as is a great museum.

Considered by many waterfall aficionados to be the most alluring and breathtaking of Brazil’s many waterfalls, Tabuleiro Waterfall is found in the Brazilian state of Minas Gerais, in the east-central portion of the country on the South Atlantic Coast.

Ranking as the third-highest of Brazil’s waterfalls, it’s found along the Espinhasso Mountains and is best reached with a professional guide, many of whom can be hired in the surrounding towns or at the park’s headquarters.

With a fall of nearly 700 feet, much of the water dissipates into a beautiful spray before striking the pool below.

At nearly 300 feet in height, Buracao Falls is another stunning waterfall in a country filled with them.

It’s located along in the Diamantina Mountains near the town if Ibicoara, in the Brazilian State of Bahia, which is in the country’s northeast along its Atlantic coastline.

Though the falls are one of the area’s main attractions, there are also accessible caves and other waterfalls in the area, some of which offer swimming, exploring and photographic opportunities that you won’t likely see again.

It’s best to go with a professional guide; the most common starting point is the town of Ibicoara.

At nearly 1,000 feet tall and cascading over the towering semicircular rock ledge above, Salto Sao Francisco Waterfall is another must-see when in the Brazilian state of Parana.

Due to its staggering height and the winds that rip through the falling water, much of the water atomizes before it reaches the pool below, enveloping the area in a dramatic and picturesque mist.

The falls are best reached with an experienced local guide because the roads into the park area are treacherous and not good places for tourists with rent-a-cars.

There’s also a hike from the parking area to the falls which is moderately difficult but offers multiple viewing areas from which to see the falls in all their splendor.

Known as the ‘Big Devil,’ or ‘The Devil’s Throat,’ the falls at Garganta del Diablo certainly get points for the most colorful and ominous name.

Distinct for its three streams of water that come together to make the falls, there are ample trails leading to different viewing areas and even a cable bridge from which you’ll get sprayed with the fall’s frothy mist and be deafened by its roar.

The falls and park can be viewed from the Brazilian and Argentinian sides, and its best to visit them from March to May or September to November if possible.

Located roughly equidistant between Sao Palo and Paraty, the trip can be done in a day, but it’s better experienced as an overnighter since Paraty is a place you’ll likely want to see due to its quaint atmosphere and colonial architecture which make it a perfectly relaxing coastal town. 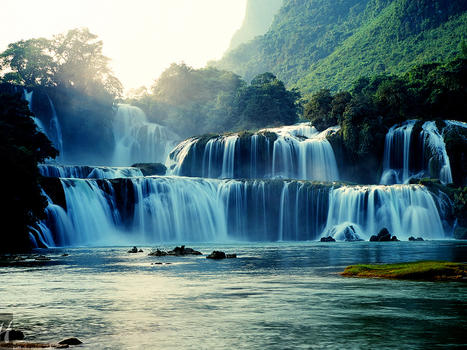 The falls are a two-kilometer hike from the park entrance and there’s no fee to enter. Bring your camera, swimming trunks, snacks, and water, because there isn’t much else around other than natural beauty.

Located in a park of the same name in the idyllic town of Canela, Caracol Falls are among the most visited sites in the area.

At nearly 400 feet tall, the falls are among the largest in the Brazilian state of Rio Grande do Sul.

Due to the falls’ magnitude, to see them in all their glory, visitors must traipse up more steep stairs than it takes to scale the Eiffel Tower; if you’ve got the energy and determination, your effort will be well worth it.

For those who don’t want to break a sweat, there are much easier viewing areas along the trail.

Smoke Falls are found in the Chapada Diamantina region of the state of Bahia, on the central-east coast of the South Atlantic.

Translated from English, the “Cachoeira da Fumaca” – or Smoke Falls – tower nearly 800 feet into the Brazilian sky before pouring back down to the earth below.

Named for the clouds that often envelope the falls, as the water falls, it’s often buffeted by strong winds that turn it into a thin, fog-like mist giving the falls a mystical appearance.

Located near the coastal town of Ubatuba a few hundred kilometers east of Sao Paulo, Prumirin Waterfall can be seen as a day trip from either place.

Another of Brazil’s multi-tiered waterfalls, the water flow can be forceful and dangerous in the rainy season, and in the summer, it can be downright crowded.

The area is home to numerous waterfalls, some of which can only be seen after a long hike, while others are more accessible and family-friendly. Swimming and picnic areas are plentiful and there’s ample parking near the park entrance.

One of the main draws for visitors to the Chapada dos Veadeiros National Park in the Brazilian state of Goias, the Salto do Rio Preto Waterfall isn’t the easiest to find.

The trail to the falls is a nearly six kilometers long, though there are other scenic river spots closer where you’ll be able to stop for a snack or take a swim.

At nearly 400 feet tall and surrounded by largely pristine forests, the falls will make the trek worth your while; chances are you won’t have to fight any crowds, even if you go during peak season.

Whereas some waterfalls are famous for their height, the Salto Yucuma Waterfall is renowned for its breadth.

Spanning nearly 5,000 feet from side to side, it’s the widest waterfall in the world. You won’t even notice its modest height of 50 feet when you’re struggling to see from one end to the other.

Located near the municipality of Derrubadas in the state of Rio Grande do Sul, the falls should be on your itinerary if you’re anywhere in the area.

The water flow can be treacherous during the rainy season, so be careful.

At nearly 500 kilometers from the country’s capital, Brasilia, Pe da Serra Waterfall might as well be in a different world.

Located near the town of Ubatuba, the falls are modest but beautiful. They’re conveniently nearby plenty of hotels and restaurants that’ll be pleasant stops after a day of fighting through the forest.

There are plenty of other natural and historic attractions in the area, including the Mirante Do Cristo statue of Christ opening his arms from a peak in the Serra da Mantiqueira Mountains; a sight that has become an internationally recognized icon of the country of Brazil.

At nearly 250 tall, the Veu da Noiva Waterfall in the state of Mato Grosso shouldn’t be missed if you’re in the area. Located inside a national park chock full of natural beauty, the falls have carved their way through the surrounding rock over countless eons, forming a large lake which is a great place to take a dip.

The falls and pond are on the Coxipo River and there are trails leading from the park office to various viewing and access areas. If you’d rather not get your feet dirty, there is a viewing area not too far from the parking lot.

Located near the town of Bonito in Mato Grosso, the nearly 500 feet tall Boca da Onca Waterfall is among the highest in the area. In English, the name means ‘Jaguar’s Mouth,’ but don’t worry, most visitors aren’t attacked by bloodthirsty jungle cats. It’s best to book a tour in town, then you’ll be able to visit more than one of the area’s 10 waterfalls.

There are trails of varying difficulty to all of the falls, and though they’re all beautiful, only a few are suitable for swimming.

The area is known for its wildlife, rugged beauty and the native villages sprinkled through the forest, some of which are visited on many tours.